La Presentación School, winner of the contest “Who wants to be a millionaire”

“One language sets you in a corridor for life. Two languages open every door along the way” Frank Smith.

This contest was a great experience because I got to test my English skills as well as my general culture knowledge by answering some questions, the welcome was very charming, and the event itself was pretty enjoyable with so many different activities and other contests aside form “Who wants to be a millionaire?” The event hosts were very nice to everyone and made it a fun event for the public as well. The Langfest was being broadcast through YouTube and had viewers from many different countries as well, which was great considering it was a foreign language festival, having viewers from all over the world surely made it more interesting, knowing this I was nervous at first but as I started talking and answering some of the questions my nerves started to slowly go away until I was feeling a little more confident, to the point that I was the contestant who had correctly answered the most questions, unfortunately, I couldn’t answer more because the one I got wrong was the one that nobody knew about, not even me, so it was a tough question, but anyway I got victorious and overall it was a very rewarding experience. 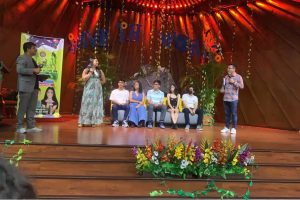